On Promoting Karuizawa: Rendezvous with the Founder and Editor in Chief of the Karuizawa Vignette

The Karuizawa Vignette, the brainchild of Sayako Hirokawa, was first published 40 years ago with the aim of promoting the beauty and charm of Karuizawa, the popular Japanese mountain resort. To date, 121 issues of the Karuizawa Vignette have been published. Over the years, it has gained immense popularity within the resort and can be found in every living room in Karuizawa.

We had a chance to speak to the woman herself, Ms. Hirokawa about what attracts people to Karuizawa, and about life in the resort town.

A Villa Resort with a 100-Year Long History

According to the Ministry of Land, Infrastructure, Transport and Tourism’s survey, in the residential sector, the villa site at Karuizawa showed the highest price rise in the prefecture from last two consecutive years. What makes the area so popular?

“In addition to the clear air, smell of the trees and natural beauty, its more than 100 years of history and tradition add an unmatched charm to this resort”- Ms. Hirokawa says.

The history of Karuizawa dates back to the Meiji era when Alexander Croft Shaw, a missionary from the Anglican Church cleared the area. From the Meiji to the Taisho era, most villas were owned by elite Westerners who would spend their vacations here. (They were invited to live in Tokyo with a view to learn from their culture, and adopt their economic, industrial, and academic practices to help modernization of Japan). After a while, the Japanese politicians, celebrities and other top brass started to build their villas here too. 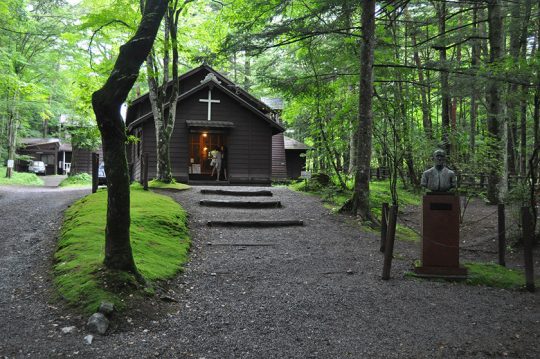 The Origin of Karuizawa – The Shaw Memorial Chapel

The Culture and Heritage of Karuizawa

Ms. Hirakawa has covered several of these historic villas in her stories. Of them, the oldest Western-style villa, which belonged to Saburosuke Mitsui (a successful Japanese businessman who was the head of the eighth generation of Mitsui zaibatsu) is said to be one of the most valuable villas existing till now.

“It was built around Meiji 33th (1900). It’s an elegant and quaint villa, and it’s hard to imagine that it was built so long ago.”

She showed us this amazing photo in which we could see its profound interior, lace curtain on a white window frame, wicker chairs and a classy chandelier, all reminiscent of Rokumeikan, a Meiji era building that was built to host foreign dignitaries.

“This villa is deeply associated with Asako Hirooka (a successful Japanese businesswoman). Her life was used as the model of the famous NHK morning television program Asa ga Kita. There is a picture of her sitting on this wicker chair right here.” 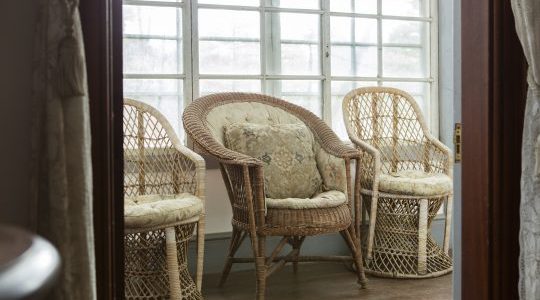 Asako was the daughter of the head of the sixth generation of the Mitsui zaibatsu, Takamasu Mitsui. She was quite close to her brother-in-law Saburosuke, and often visited him at this villa.

The villa constitutes both a western and a Japanese building, co-existing and complementing each other, which is rather unusual. The Mitsui family was one of the most prominent zaibatsu  (a financial clique) in Japan, so their family villa was often visited by political and executive heavyweights, including the Japanese former Prime Minister Saionji Kinmochi. The Indian poet Tagore also stayed the villa once and meditated under a nearby fir tree.

“The place gets its glory from villas of cultural icons like Murō Saisei and Tatsuo Hori, and the paths once walked by John Lennon. The appeal of this place lies in its culture and heritage, which fills the air of these captivating villa-dotted forests. The beauty, history and culture of this place have been attracting many people over the years, who often end up wanting own their own villa after a few visits. Especially, since the Shinkansen began operating. With better connectivity, the number of people wanting to build a villa and move here has increased.”

Things to Consider When Building a House in Karuizawa

Karuizawa enjoys a reputation of being a city of villas. That being said, many people are so enticed by Karuizawa’s charm that they choose to settle down in the area. Ms. Hirokawa has covered a lot of these people’s stories.

“Surprisingly, many people move to Karuizawa just based on their image of the area and they fail to do thorough research before making this important decision. If you build a house here based solely on a nostalgic whim and its reputation as a stylish summer resort, you won’t get very far. For example, many people come to Karuizawa wanting a spacious house with a breezy living room without thinking about the heating costs in the winter. If the windows are large, you get to enjoy the beautiful garden views in the summer, but this makes it more difficult to keep the house warm in winter. Houses with too much glass tend to get very hot and turn into sauna due to the hot summer sun. Because it gets very cold in the winter, even with double glazing, it’s important to have walls with solid insulation.” 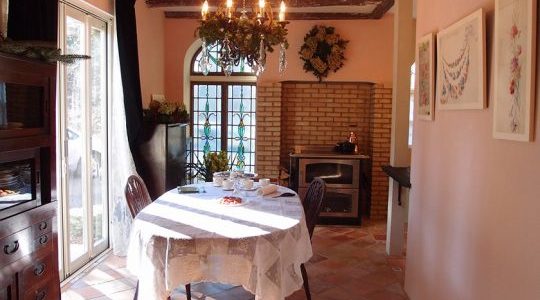 “What worries me is that even well-known architects may not have enough experience and knowledge of Karuizawa. I think it’s best to consult local construction companies or house builder who have a lot of experience working in the area as they are familiar with Karuizawa’s unique climate and are well-versed with regulations of Nature and Landscape Conservation Act. Before moving here, it may be a good idea to live in the area for perhaps a year on a trial basis.”

About the Karuizawa Lifestyle

One of the best things about Karuizawa is that each season brings a unique beauty to the place. The fragrance of the flowers and lush greenery, the chirping of wild birds, squirrels running up tree branches, Karuizawa is truly at one with the elements. Here, you can enjoy natural beauty every season in a way that’s impossible in a city. There’s also an abundance of edible wild plants, mushrooms, timber and other resources in the highlands.

All your shopping needs are well met here. There are many shops, bakeries, restaurants, and stylish boutiques. At a short distance from Karuizawa, you can enjoy the treasures of “Shinshu”. 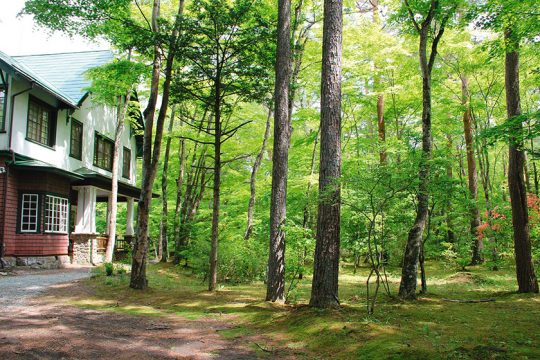 “Please don’t forget that Karuizawa is on a mountain that’s about 1,000 meters above sea level.”- Ms. Hirokawa calls attention to the untold rule of this area.

“Since this is a summer resort that was originally established by missionaries as a place of relaxation and rejuvenation, there are implicit rules you need to follow for a comfortable lifestyle.”Ms. Hirokawa says that it all comes down to a sense of “being one with nature”. This means, we need to respect nature while it lets us enjoy all its bounties.

“It goes without saying that we cherish the lush verdant environment here, but remember this is a plateau at an altitude of 1,000 meters. Don’t be surprised if you find bears and wild boars here, this is the highlands after all. The convenience stores close at 11 pm. As it’s forbidden to make loud noises late at night, fireworks aren’t allowed when it’s late. With these rules in mind, you can have all the fun you want. I think that it continues to be such a nice resort people have been following these rules.”

This article has been translated by Jessie Jackson from the original Japanese article
「軽井沢を伝える想い。軽井沢ヴィネット初代編集長に聞く～後編」by Karuizawa News Paper Editorial.

Tag：
※The content provided is based on research from the original published date. All information is subject to change.

We provide tips & advice about everything related to real estate in prime resort regions of Japan.